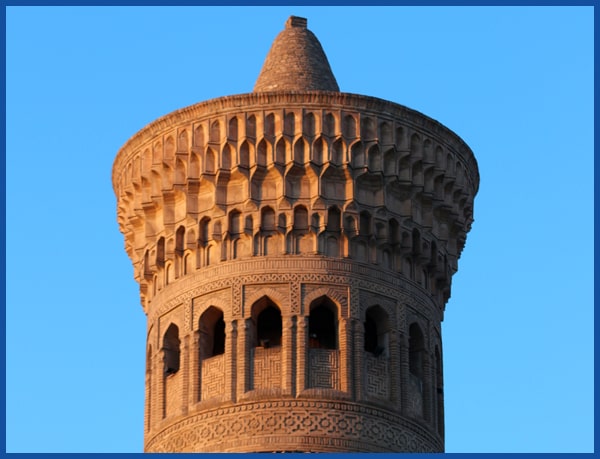 Day 1: Tashkent
Dear guests, welcome to the capital of Uzbekistan, Tashkent city. Today there will be a city tour with the visiting of many sightseeing. The main square of the city was erected in honor of the victory of the WW2. Then the guests are able to walk along the local Broadway. This is a street which is located between the independence square and Amir Timur square. The metro is famous in the entire Central Asia. It was set in 1977. Then our tour is taken along famous ancient cities, as Chorsu Bazaar, Kukaldash Madrasah and Hast Imam complex. The night is in the hotel.

Day 2: Tashkent - Chimgan Mountains - Tashkent
From Tashkent we take a way to well-known Chimgan Mountains, from which we can notice the Beldersay peak, vault it in 30min and then have a view of the panorama of the territory. Being at the territory it is possible to enjoy the beauty of nature, feel fresh air and of course take remarkable photos. Then the guests make a visit of the Charvak Lake, to take a swim and then to return back to Tashkent. The night is ordered in the hotel.

Day 3: Tashkent - Termez
The destination of today is the flight to Termez. It was created long time ago, and bears interesting history, and starts the development as one of the flourishing cities. Here various cultures are emerging, and we can witness the remains of these cultures. The city was destroyed in 1220 by Genghis Khan. We would like to notice that it is the city created at the territory of the old city. The following places are of great importance for visiting: Archeological museum, Fayaztepa, Mausoleum of Hakim at Termezi, Buddhist Stupa Zurmala, Mausoleum Sultan Saodat, Honako Kokaldor Ota, Nunnery Kirk Kiz, Jarkurgan's Minaret, Dalverzintepa. Te night will be spent in the hotel.

Day 4: Termez - Shahrisabs - Samarkand
Shahrisabs is the perfect place for seeing during the tour in Uzbekistan. And now it is seen as the interesting attraction for the guests. It is said to be created by Amir Timur - Ak Saray Palace, which is he enigmatic location in all spheres as beauty and greatness. The gates have the note saying that if the people want to now the power, it is necessary to look at the buildings. The next destination is the Jahongir mausoleum, put by the son of Amir Timur. You will listen to the historical notes of the country, cities and the sites. The night will be in the hotel of Samarkand.

Day 5: Samarkand - Bukhara
The second largest city of Uzbekistan is Samarkand and now it is one of the most visited places of the country. The tour will be made and the guests will surely travel to Registan square, Shakhi-Zindeh, Mausoleum Guri Emir and Bibi Khanum Mosque. The square was created with three madrassas of 15th century. All of the creations of the city are aimed at the admiration of the visitants. The wanderers will be able to visit the Bibi Khanum Mosque. Then the night will be in the hotel.

Day 6: Bukhara
The whole day will be devoted to Bukhara, and the city tour is going to be taken for all to travel. Also the city is said to be the Citadel Ark, used to be the home of many dynasties of Bukhara. Basically the atmosphere of the city dates back to 9th century. Being here please visit the Bolo-Hauz mosque, Chashma Ayub. The guests are going to travel along Nodir Divan Begi, Poi Kalon complex, Kalon minaret, Kalon mosque and Mir Arab Madrasah - the sites of 12th-16th centuries. The night is in the hotel.

Day 7: Bukhara - Khiva
This day is going to be devoted to the travel tour to Khiva, one of the oldest places of the country. Today it is the memorable place which should be seen and found out to be the place of the legend of the Khorezmshah's State. In the past it used to be the center of trade. Passing the city, the guests will be able to see the Kizilkum desert, the Amu Darya river and Panj and Vakhsh. The night will be in the hotel.

Day 8: Khiva - Tashkent
Coming back to Tashkent the people of the tour are going to visit the Ichan-Qala, the city located surrounded by the walls in the city of Tashkent. Now the visitants have the opportunity to see the buildings and palaces, mosques and other historical sites. This building seems to have about 400 traditional houses and about 60 architectural monuments.  Today it is possible to travel here along Kalta Minor minaret and Tash Khouvli. In the evening the guests will be taken to Tashkent, for the night in the hotel.